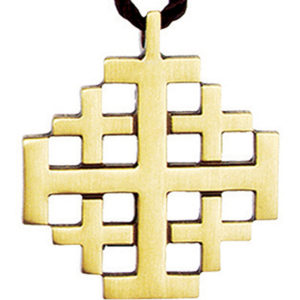 The cross is one of the central themes in Christianity. Greek crosses, Latin crosses, Celtic crosses, and Jerusalem crosses are just a few examples of the different types of crosses created throughout the history of the Catholic faith.

Some crosses, such as the Latin cross, are simple in design, while others, including the Celtic and Jerusalem crosses are more elaborate. Nowhere is the symbolism of the cross more potent than in Jerusalem crosses, with their four crosses in the corners of the emblem, surrounding the central cross. 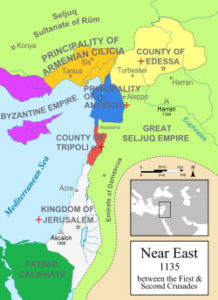 Dating back to heraldic times, Jerusalem Crosses were the emblem and coat of arms of the Kingdom of Jerusalem (Latin: Regnum Hierosolymitanum; Old French: Roiaume de Jherusalem), circa the 11th and 12th century, when Crusaders captured Jerusalem, establishing Christianity in the area.

The kingdom was ethnically, religiously, and linguistically diverse, although the crusaders themselves and their descendants were an elite Catholic minority. They imported many customs and institutions from their homelands in Western Europe, and as most Crusaders came from France, the official language of the kingdom was langue d’oeil, which was then spoken in northern France and by the Normans.

From this, you can see the geographical and religious influences of the time that created this heraldic emblem that is still used (mostly) in Catholic tradition today.

The Design of the Jerusalem Cross 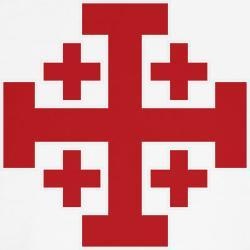 Also known as the Five-Fold Cross, or “cross-and-crosslets”, Jerusalem crosses are a variant of the cross and consists of a large cross that is surrounded by four smaller Greek crosses – one in each of the quadrant formed by the larger cross.

It is not to be confused with the Lorraine cross, which has sometimes been called the “Jerusalem cross”.

This same symbol was adopted as the coat of arms and the emblem of the Kingdom of Jerusalem from the 1280s. The Jerusalem cross was given by Pope Urban II to the crusaders in the Middle ages. It was then adopted by the Crusaders and is, therefore also known as the ‘Crusader’s Cross.’

There are various takes on what the heraldic emblem represents. The red of the cross symbolizes God’s sacrifice for man.

One is that the four smaller crosses in each of the quadrants made up by the bigger cross represent the authors of the gospels – Mathew, Mark, Luke, and John. These writers also helped spread the word of Jesus in the four corners of the world.

Today these four crosses or crosslets are viewed as a symbol of Christ’s command to spread the Gospel around the world – a mission that was started in Jerusalem.

The Five Wounds of Christ

Another symbolism is the representation of the five wounds of Christ. The smaller crosses represent the wounds on Christ’s feet and hands, and the larger central cross represents the wound inflicted by a soldier’s spear.

Today, many believers wear the Jerusalem Cross as a sign of commitment to the eight Beatitudes – the way that Jesus Christ taught us to reach the kingdom of heaven.

You can still see those Crusader influences in Israel today, particularly in Jerusalem, there are more churches and institutions belonging to different Christian denominations than in any other place in the world. You will see Jerusalem Crosses for sale at many souvenir shops there, due to its continued appeal as the Pilgrim’s Cross.

The Custody of the Holy Land (Custodia Terrae Sanctae) 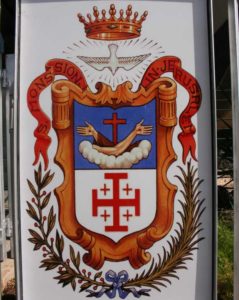 The Custody of the Holy Land belongs to the Franciscan Order and its mission is to guard the holy sites of the Catholic Church in the Middle East.

In the order’s coat of arms, you will see a crown symbolizing the Father and ruler of heaven. Under the crown is a dove symbolizing the Holy Spirit. The bare arm belongs to Jesus and the sleeved one to St. Francis. On the palms of the hands you can see a small cut that symbolizes the nail in Christ’s hand and the marks of the stigmata – the wounds where nails pierced Christ’s body. Below this is the Jerusalem Cross. The inscription “S. Mons Sion in Jerusalem” refers to one of the main Franciscan sites in Jerusalem – Mount Zion. Two branches wrap around the lower part of the symbol. One is an olive tree branch that symbolizes Jesus as the Messiah (his body was anointed with olive oil) and the other is a palm branch. Jesus was welcomed into Jerusalem by people holding palm branches in the last week of his life.

The Flag of the Georgia Republic

Did you know that the flag of the Georgia Republic also features the Jerusalem Cross?

The current flag was used by the Georgian patriotic movement following the country’s independence from the Soviet Union in 1991. By the late 1990s, the design had become widely known as the Georgian historical national flag as vexillologists had pointed out the red-on-white Jerusalem cross shown as the flag of Tbilisi in a 14th-century map by Domenico and Francesco Pizzigano.

A majority of Georgians, including the influential Catholicos-Patriarch of the Georgian Orthodox Church, supported the restoration of the flag and in 1999 the Parliament of Georgia passed a bill to change the flag.

Have You Seen Our Beautiful Jerusalem Crosses?

Jerusalem Crosses are a popular choice among those who are looking for a symbolic way to express their faith and remind them of Jesus’ connection to the Holy Land.

They make wonderful gifts for relationship building and student spiritual development. You can give away these lovely and meaningful crosses at high school retreats or simply keep one for yourself to help you during times of reflection.

How do you use the Jerusalem Cross as part of your faith celebration? We’d love to hear from you below.

Be the first to know! Promotions, exclusive offers, and new arrivals.