The cross, the principal symbol of the Christian religion, recalls the Crucifixion of Jesus Christ and the redeeming benefits of his Passion and death. The cross is thus a sign both of Christ himself and of the faith of Christians. Throughout Christian tradition you will see many forms of the cross including Celtic crosses, Greek crosses, Latin crosses, and Jerusalem crosses. In looking at the design of these symbols of faith, some crosses, such as the Latin cross, are simple in design, while others, including the Jerusalem and Celtic crosses are more elaborate.

The Celtic cross features a cross with a ring, or nimbus, circling the intersection, and a small circle in each corner.

It is a beautiful example of Insular art, also known as Hiberno-Saxon art, which was created in Ireland and Britain in the post Roman Empire era, circa 600 AD. The Latin word for island is insula, thus the term Insular art.

This art produced on the British Isles during the Migration Period art movement and the Early Medieval Western art period shared a common style that was different from that produced in the rest of Europe. What makes it unique is that it combines those two art styles into one.

The Insular style is most famous for its very intricate decoration, which includes spirals, circles and other geometric motifs. You can see that influence in the circle in the Celtic cross.

Other examples of this art style can be seen in the Book of Kells, and other finely illuminated manuscripts, metalwork and carvings in stone.

The influence of insular art affected all subsequent European medieval art, especially in the decorative elements of Romanesque and Gothic manuscripts.

The finest period of the style was brought to an end by the disruption to monastic centers by Viking raids, which began in the late 8th century.

The High Crosses of Ireland 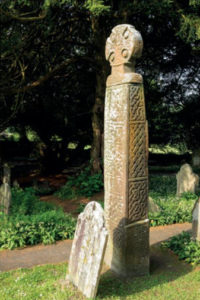 Pagan Celts were in the habit of raising memorial stones. The original High Celtic cross of Ireland is distinguished by four little circles that appear at the junctions of the arms of the cross, and the four arms of the cross narrow at their base to form the circle shape. Four circles in this early design strongly suggest solar references, either diurnal or seasonal.

As Irish missionaries came to the area, they took over the tradition and the designs started to show Christian themes and the addition of the ring around the intersection formed what we now know as the Celtic cross.

Interestingly, some art historians theorize that the design of the Celtic cross was 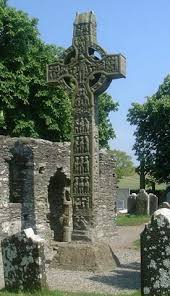 pragmatic, rather than stylistic, as standing crosses were made in stone and needed the added strength of the circle to support the weight of the cross beams, which proved to be advantage of survival compared to other forms of the cross that have only survived as shafts.

When considering the height of some of these high crosses, you can see why the structure needed to be reinforced by the circle. Earlier crosses were typically up to about two metres or eight feet high, but in Ireland examples up to three times higher appear later, retaining thick massive proportions, giving large surface areas for carving. The tallest of the Irish crosses is the Tall Cross at Monasterboice, County Louth. It stands at seven metres or twenty-two feet high. It is a great example of the original design with the four circles in the four corners.

Some crosses were erected just outside churches and monasteries; others at sites that may have marked boundaries or crossroads, or preceded churches. Celtic crosses do not seem to have been used as grave-markers in the early medieval period, but by the 19th century Celtic crosses, with decoration in a form of insular style, became very popular as gravestones and memorials, and are now found in several hundreds of cemeteries across Scotland, Wales, Europe, and several other countries.

The Symbolism of the Circle in the Celtic Cross

There are different interpretations of the circle in the Celtic cross. Some presume that it represents the halo of Jesus Christ. Others are under the impression that St. Patrick borrowed the circular pattern from the pagan’s sun-god symbol and combined it with the cross of Christ to represent God’s life and light. It is clear from archeological evidence that the Celtic Cross evolved over time.

The Significance of the Celtic Cross Today

Today, you can see the design in both Celtic Crosses (the Irish version) and the Presbyterian Cross (the Scottish version), which doesn’t feature the four small circles.

Both Presbyterian and Catholic priests find that the Celtic Cross holds a lot of meaning. They believe that the circle is symbolic of eternity – the eternal and everlasting love of God, demonstrated by His sacrifice on the cross for our sins.

We have a wide variety of Gaelic crosses, Claddagh crosses, High Cross of Ireland, Celtic Religious jewelry, Celtic Cross pendants, and chains at the Terra Sancta Guild. The crosses are available in sterling silver, and there’s even an antiqued bronze with an intricate Celtic knot cross design that comes with a 24” bronze-plated chain. You’ll even find a Celtic pocket prayer with an ancient Irish benediction.

How do you use the Celtic Cross as part of your faith celebration? We’d love to hear from you below.